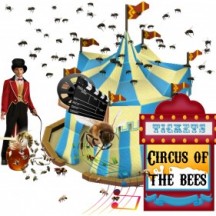 CIRCUS OF THE BEES

A composer who works or wants to work in film should be given the opportunity to suggest ways of improving the narration and actively contribute to the construction of the film, as I explained in the first article dedicated to my thoughts on the teachings of Richard Bellis. But the director's opposition or the imposition of his ideas, or the ideas of the producer or film executives, can make mince-meat of the composer's great proposals. As I explained in the second article, facing up to the director can put a composer in a compromising position, making him appear conflictive when his only intention is to improve the film.

Unfortunately almost everyone involved in a film has his own idea about the music and shows no qualms in expressing it: the editor about the brass instruments, the director about a note he feels is jarring or about a specific instrument that shouldn't be there or the producer or executives on the music they don't feel is pretty enough. I am not referring to the positive contributions that might be made and are appreciated, but those which the composer suffers through because they are made through ignorance. So much so that a young or emerging composer may have produced a through-line that even John Williams himself might applaud (and why not?). But being young or just starting out the only gratitude he gets is often contempt or  humiliation from those who never would dare to face Williams or Zimmer.  A young or emerging composer (and they are not the only ones) is usually at a disadvantage and in a weak position vis-a-vis the others. He needs patience, diplomacy and wisdom, and perhaps a good dose of tranqilizers, to deal with such situations, if he is able to use the margin of discretion left to him and not succumb. Many have simply given in.

It is not always the case, of course, but it is usually so especially with composers who are starting out. They have an added complication as well in that other composers are ready and willing to do the same job without causing problems, or will offer their services free of charge, sometimes are even willing to pay costs. The result in all these cases will be of a lower quality. Sometimes the music does not matter much to anyone.

When competition is so rife, composers are often ready to agree rather than defend their own criteria. If a composer who wants to be hired for a movie and has to insist with phone calls, be generous with invitations to dinner, appearing always at photocalls and parties, acting exquisitely polite to people who do not deserve it and who are willing to work for other composers, it is virtually impossible that if finally he gets the movie that he will want to argue much with anyone, knowing well that on the other side of the door there is a line of composers who have made calls, made dinner invitations and appeared smiling and flattering at parties. He should not even be controversial after the fact. Not long ago, a famous composer published a message in Facebook expressing disgust with a director with whom he had just worked. On the advice of colleagues, he erased the message in short order.

When a composer has reached a certain level of prestige, fame, or power these efforts to ingratiate oneself may not be necessary, but for someone not yet well known, it all seems an essential part of the circus for which not everyone is prepared.  It consumes a great deal of energy, is psychologically wearing and may well dampen the creative aspirations of someone with talent. There are a lot of bees prepared to make the same honey. But it can be bitter when one offers his own personal, well drawn honey, only to find that the beekeeper chooses another bee of lesser category, not for his honey but simply because he knows he will not sting.

Unfortunately this is the way the system works. To this we must add that there are composers who move very well under these conditions, either through lack of artistic aspirations (perhaps the concept composer-film maker seems idiotic to them) or through pragmatism, maybe they know how to give what is asked for and are not able to provide anything further. They may not be the best, but they are those who survive. And they know to wait: working for another composer, solving problems, accepting that not he but his employer will be the one who is praised, even considering himself fortunate if after a few years he manages to write some additional music and be credited for it. It is a difficult system in which many are condemned to frustration and failure.

I began the previous article with the following question:

"If aspiring composers working in the audiovisual media were given a choice between developing their careers by being obedient and doing what they're told, or by being creative, following the director's vision but adding useful ideas, what would they choose?"

Other than intruders or those with little talent, I do not think that any emerging and talented composer who knows about film would give up the idea of becoming a film maker one day, as many composers of the past, and some even today, have been forced to do. But times have changed in the industry and not for the better, and as far as music is concerned the change has been much worse. Especially in the United States, not only composers just starting out but others with reputable names are often treated by directors and the industry as if they were nothing. And even when the best of the American model is being imported into Europe in terms of production and profitability, the worst is also being included in the package. The number of aspiring composers looking for an opportunity has greatly increased and has led to the rise of a legion of imitators: these are prepared to do of what is successful, what is demanded, linking professional (and even worse, artistic) success to their having been one of the dozens of orchestrators hired by a famous composer or by having signed the soundtrack of a film of some renown, even though its music is mediocre.

The worst part of this whole process is that having your name in the credits is being celebrated as if you have conquered Everest, with all it entails: public projection (photocalls included), even though the end result of the film takes second place, if it is considered at all, especially if the emerging composer does not really feel being part of it (some do not care about that, anyway). It is not uncommon to see a Vanity Fair take place in Facebook where compliments and praise are accepted from people who have not even bothered nor have an interest in seeing the film, a situation which must be somewhat offensive for a composer-film maker. The need for recognition is perfectly understandable and, given the circumstances, cannot be criticized as too many emerging composers are badly treated by the industry professionally, personally or artistically, sometimes in all these ways. It is not uncommon that even where, through bad decisions made by others, a composer has not been able to avoid the poor construction of the music in the film, he often has to fight to be recognized for his work as a musician. It should not be like this, but unfortunately this is the case.

And that is why, to conclude, the teachings of Richard Bellis are so useful for those who are beginning to work in film, and why I urge that he be listened to. However, the emerging composer must understand that all this apocalyptic landscape I have described briefly here may be a period of transition, that of an overpopulated honeycomb wanting to pollinate a field where there are few flowers. It all depends on who is going to be fortunate and be able to demonstrate that they make the best honey. But this means they they need to also be film makers. And also that the US might import the best of the European product.