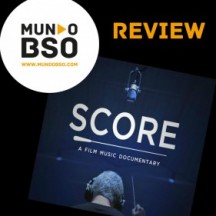 Score: A Film Music Documentary, written and directed by Matt Schrader, was screened at the 10th Film Music Festival in Krakow. The film was made possible thanks to an intense campaign on the Kickstarter website, where $ 121,000 was raised from nearly 1,300 sponsors. The generosity shown has been well rewarded by a film that, although not perfect and weak in some respects, contributes to promoting interest in the art of film music. That the film has been produced is in itself a reason for celebration, because of what it adds and in no way substracts.

This documentary covers different aspects of film music, such as its history, the production and recording process and the final result--its application in the film. Comments from some forty composers (mostly from US industry) are included, with archival images from another ten, as well as the participation of diverse professionals (record producers, agents, publicists, historians, etc.) But, curiously, only one director: James Cameron. This disproportion is a negative aspect of the documentary. While it is certainly a delight to see the inclusion of so many composers (find the complete list here), the jumping from one to the other, many of them with a very brief intervention because of time constraints, ultimately makes any explanation of the topic piecemeal and fragmented. Thus, for the average viewer, instead of focussing attention it distracts. It is no doubt likely that due to the circumstances of the documentary's production, as well as the inexperience of its director (it is his first film), that with the number of composers added to the project--something initially announced in the social networks with deserved enthusiasm-- a debt of gratitude was set up which made it necessary for them all to be included. Some finally had to be removed, but the sacrifices have not been sufficient to benefit the film's narrative, which has no space to breathe.

And yet during part of the film, especially in its first half hour or so, a narrative coherence is achieved with several voices, in a great and successful editing effort. This is not so in all the footage, because in the second half, when they begin to discuss recording with the orchestra, it starts to lose ground and even interest, which is never properly recovered again, mainly because the film sets out to teach and explain through anedcotes.

The first part is the most interesting. It addresses what is most important: the meaning and purpose of music in film. However, this part is given less emphasis, and although there are some interesting examples mentioned, it does not go much further, despite being much more important than the business of recording, to which much more time is dedicated. To give an example, critic Leonard Maltin comments that music has the ability to contradict or deny what the director explains with images (something that MundoBSO has dealt with unendingly) ... and there it remains, a door--like so many others--that is never gone through. The main drawback in this ambitious and well-intentioned documentary is that it aims to encompass a great many things but in the end only goes halfway in everything.

Music in film is a broad, intense and complex subject that can be dealt with from an intellectual or emotional perspective, to explain its historical evolution or focus on the creative or technical process. The path chosen here is clearly that of reaching a wide audience, playing down the teaching aspect for the benefit of entertainment. More anecdotal than didactic... some of what is said is of great interest, while other comments are less so.

The film's weak point is not what it explains but rather what remains without explanation. The creative process is certainly of great interest and is well explained, but the truly exciting aspect dealing with the final results, when music becomes cinema, is hardly dealt with at all. Furthermore, for all its virtues, the documentary suffers problems in its editing. Hopefully, released on DVD when it can include all the interviews in full (and those that for obvious reasons have been excluded), it will gain a great deal and will probably result more didactic.  While not remarkable the documentary is highly recommended. One is enormously grateful for the effort made to produce it.