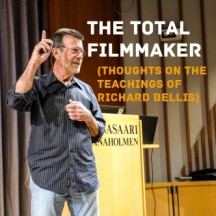 (Thoughts on the teachings of Richard Bellis)

At this year’s International Film Music Festival, Fimucité in Tenerife I had an opportunity to listen to Richard Bellis giving one of the conferences with which he is spreading knowledge around the world. Bellis is an Emmy-winning composer, author of The Emerging Film Composer and I have absolute respect for him intellectually. Any composer who wants to begin working in the audiovisual media should attend his lectures for, among other things, his lucid and valuable advice about recording, synchronization and especially about the relationship with the director.

I largely agree with his statements but differ on one aspect: Bellis holds, almost as a starting point, that film music should not be considered art merely to serve other art because the composer does not have the freedom of creation that any artistic work should have.

The sculptures in a cathedral are as much art as the architecture of the cathedral itself. The sculptor works in the service of an employer (the bishop, the Pope) and it is clear his freedom is conditioned by the paymaster’s constraints. Could we consider as art only sculpture made in the freedom of a studio but not when it is done as part of a whole, or for a specific assignment? The artistic category can be discussed if for example the artist works under the exacting  demands of an employer who tells him/her what to do in a commissioned work simply because he/she can not do it alone.  When the margin for creativity of the artist is nil and submissive obedience is expected, he/she will not produce art but craftsmanship.

Cinema is the end result of various arts: photography (camera) architecture (set design), literature (script), performing arts (performance), and also music. There will be cases in which the composer will have limited creative freedom to work in the cathedral (the film) while at other times it will be broad and decisive. It would be unfair to tell a composer that if he wants to create art he should do it in a concert hall for in movies he will be simply an artisan. Is Mozart's Requiem art but not when it forms part of the narrative -not only of the aesthetics- as in Milos Forman's Amadeus (1984). Are the gargoyles of Notre Dame Cathedral not to be considered art as they would be if set in a garden?

Ennio Morricone's creation for The Mission (1986), is a work of art, not only for its beauty and musical category, but for its significance, for what it adds to the rest of the film and because without it part of the poetic, spiritual and ideological components of the film would be lost. Should this music be considered art at a concert but not when it is constructing a film, which is exactly what it has been created for?

Obviously there is music that is strictly craftsmanship. For example the music that is part of The Imitation Game so prevalent today: copying other music or following the same patterns. Or music that is mere wallpaper in scenes or that accompanies the film as if it were a gondolier singing beautiful melodies, without adding anything significant.

But this would be nothing more than a discussion about terminology if it didn't have more important consequences. The film composer can be a filmmaker, not limiting himself to wallpaper or simply accompanying a film with music. In the same way that editors and cinematographers can be filmmakers. And if they are filmmakers and therefore also artists, they are because the film needs them, not simply because the director is being generous. This is what I demonstrate in the Lessons in Film Music series (all videos with English-subtitles): that film music is narrative, is construction, is in itself filmmaking--filmmaking that might come as a consequence of the director's wisdom. Or might not.

In my book The Music Script in Film, I wrote that the composer who does not propose solutions is one who simply follows instructions. And to propose solutions it is necessary to have the knowledge, not only about music but about cinema. In fact, to work on the cathedral that is the film, the composer should also be able to be a sculptor, painter, goldsmith, mason, decorator, carpenter, glazier or even the architect... because he may be for any of these areas. In the editorial I published on February 19, 2016 titled The most decisive, I detailed some of the powers of music, which I summarize here:

The work of composer should not be reduced to that of a mere craftsman, obedient and disciplined, subject to the discretion of the director or the producer, because it limits creative horizons. A composer-filmmaker should know how to assume the construction of the most important pillars that will hold up the cathedral, when it is something that perhaps even the director has not contemplated, but that ultimately may benefit the film. We should banish the idea that the composer is simply a scene-filler. Filling a sequence with music is a craft, not an art if music is merely added. It is essential to teach the construction of the whole narrative architecture needed to make the film. In several chapters of Lessons... I demonstrate how with a logical narrative construction the music occupies its place logically. If the director does not know how or has not thought about it, it must be the composer-filmmaker who proposes it. The composer-craftsman will merely be awaiting orders.

Among many composers and directors the idea has caught hold that music should bring emotion to a scene, whether that emotion is already in the sequence or not. With a logical narrative construction the response to possible questions should not prove a big problem. But it is more practical to replace 'what does this scene need emotionally' with 'what are we going to explain to the viewer with this scene.'  When we want to explain something with the music instead of looking at the screen why don't we look at the viewer? By doing so answers will be more easily found. It will not help to put music to a car chase, of course, unless dramatic elements of motivation or explanation are inserted there, but it may work in the most important moments in the narrative. Let the composer-filmmaker look to the viewer to decide what to explain and then the composer-craftsman fit and synchronize the music within the context. A film composer can be both a filmmaker and a craftsman, but should never be only a craftsman.

In film music, the emotion should be the consequence, never the origin. It should be the point of arrival, not of departure. In the body of the film, the concept is the marrow, the bone the music theme that hosts the marrow, the skeleton the set of structured themes and finally the meat and skin are the emotion. This is what the viewer sees, without perceiving or being aware of what is hidden under the meat and skin. Any composer knows (I do not think this is the case of many directors and certainly less of producers and executives) that music always explains something, it takes on some informational content, an ADN which determines how the viewer will understand a character or a concept. The concepts can be transformed into both music and emotion. However, when the dialogue between composer and director is developed only emotionally the composer is often condemned to continue to write a theme until the director finally tells him, 'that's exactly what I wanted'.

A composer who knows how to lead the director into the field of the conceptual is already more filmmaker than craftsman. A composer who is not waiting for instructions but has his own ideas on how to build the film narratively is also more a filmmaker than a craftsman. In what they propose the teachings of Bellis are essential as they bring the wisdom, strategy, calm, diplomacy and discipline that every aspiring film composer should know how to use to be able to survive in the film industry. But we cannot be content with creating bees that all manufacture the same honey. To show the emerging composer more distant horizons, those of the total filmmaker, can undoubtedly generate frustration since they may be difficult to achieve, or decisions made by the director or producer may prevent their being reached. Far worse would be to reach those horizons and then not know what to do there. Being an obedient craftsman certainly saves trouble and headaches, but being a filmmaker is exciting and should be the ambition of any emerging composer. What is necessary, however, is knowing what to propose where others are prepared to do no more than obey. Therefore, the explanations given by Richard Bellis, while absolutely valid, are not enough.